DUNRITE started doing business in 1995/96 from a home office in Marsden, servicing Logan, Brisbane, and the Gold Coast. I borrowed $400 from a mate and bought some equipment, loaded it in the back of a van, and got busy. We did carpet cleaning and pest control back in those days and I couldn’t wait to get rid of the carpet cleaning, so 1999 we became a pest control/termite company. 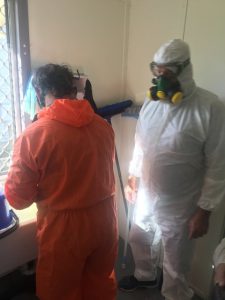 Dunrite diversified to indoor air quality (IAQ) cleaning and treating air conditioners for pathogens and mould. We were doing plenty of residential mould remediations from 2009 until current. About early to mid 2018, Dunrite began doing Methamphetamine testing and remediation. As we have many loyal customers around Brisbane, Logan, and the Gold Coast, it wasn’t long before the number of Meth tests started to grow and the remediations followed. Dunrite Decon – Meth and Mould came into its own very quickly.

Dunrite Decon – Meth & Mould is growing at a steady rate as more people become aware of the hazards of toxins in meth residue. Manufacturing meth or high-level smoking of meth leaves toxic residue that will seriously affect your health and the health of your most precious. For the cost of Rapid Testing to find out if there is residue in the house, it is really a no brainer.

Not sure what to do if your home tests positive for traces of meth residue? Dunrite Decon have you covered! Our technicians work alongside you to get your home back on track to being a safe and clean environment!
#methtesting #methresidue #decontamination
https://dunritedecon.com.au/

QLD Health has announced that mould is an ongoing issue following the 2022 floods. Mould can be persistent and damaging to your health, so don't delay in having it treated as soon as possible. Give us a call! Decontamination Done Once, Dunrite! #mould #qld https://dunritedecon.com.au/

FAQ: Will my family have any adverse reaction to the cleaning products used during decontamination? Our technicians ensure that all chemicals are thoroughly removed after use, leaving a toxin-free environment. Your family will be safe! #decon #methtesting https://dunritedecon.com.au/