Most work orders are received for testing a vacant house/unit. There are instances though where you might suspect a possible tenant or ex tenant may have used or manufactured meth. 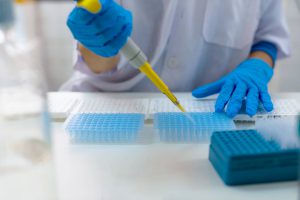 Quite simply Dunrite Decon could meet your Property manager or rep from the housing group on-site to establish the presence of meth. This is done using a Rapid test, also known as a field test. This test will return a positive or negative result, much like the common pregnancy test. The test is accurate and returns a result in minutes. There are several key locations in a dwelling to test for the initial existence of meth.

If a dwelling shows a positive result for meth, we can then conduct swab testing, referred to as ‘Lab tests’. The swabs collect a sample of the wall surface in a 10cm x 10cm square. This is in accordance with NIOSH 9111, an international standard that allows a constant for all tests if they are done correctly. This is CRITICAL!

As a swab of an area greater than the standard would return a result higher than if the sample had been taken correctly under NIOSH 9111, elevating the count.

If the test is performed on a wall surface, greater then the 10cm x 10cm area, then this can be a scare tactic, for someone; entering into a costly remediation clean/treatment. This practice is unethical and fraudulent but continues to occur in the industry.

Be sure to get the test Dunrite Done Once. Dunrite Decon.